A show drawn together by sensibility seems like an appropriate thing to address here. The particular sensibility acknowledged by Andrew Nicholls, one of the artists, and the curator of the show, is that of the ‘visually excessive’, and extravagant and opulent aesthetics. All the work is definitively figurative, often decorative, and indebted to pre-modern art and narrative. This is exemplified in the decision to focus the show on the works of William Shakespeare. The relevance of Shakespeare to each work is clear, yet appears tenuous. As a point of departure it operates successfully, but the works on display touch on more interesting contemporary discussions than Shakespeare’s legacy.

There is something absurd in decorative and aesthetic practice as it is employed here. The black humour of some of the compositions, the undoing of old and current ‘morality’, may be perceived as a flattening of hierarchies; a disintegration of orders that are impressed on us. Certainly, to appropriate the decorative and aesthetic qualities of the past is to flatten an ongoing hierarchy of modernism that continues to place a ‘truth to materiality’ at its zenith. The fallacy of materiality has been with us a long time – Jacques Rancière places its origin in western art in the renaissance, when it rediscovered Greek bronzes re-carved of marble by the Romans, that had been bleached of their colour pigmentation by time. This debasement was forgotten, and the white ‘purity’ of marble continued its fallacy right into Clement Greenberg’s treatise on the forms of art and their specificity – and painting’s in ‘flatness’. We continue to have this kind of striving towards absolute material purity now in many senses. This attitude belies the transformative and alchemical potential of art, the alteration of resemblance that sits at its heart. The work in this show is aligned against any regime of material purity, through decorative and aesthetic, figurative practices. The extravagance of their visual language, the characteristic that brought them together, is indicative of this. The decorative, particularly that Nicholls and Collins employ, is ‘impure’ in its material presence – and the more transformative and powerful for it. The relationship that this has to the absurd is the undoing of the value of meanings that goes with a truth to materiality: the pretence to purity that that approach to materiality often indicates, is undone in these works that investigate the much more topical potential of images, extravagances, appearances, and the immaterial.

The topicality of this sensibility is, perhaps, linked to the rise of what has been termed ‘neo-baroque’ aesthetics. Though principally linked (by Angela Ndalianis in Neo-Baroque Aesthetics and contemporary entertainment, 2004) to the development of various strategies in cinema and narrative, the visual rhetoric and attitude of the Baroque, and a development upon it, is also seen once more in art (Baroque tendencies in contemporary art, editor: Kelly A. Wacker). We can even see this revitalisation in the work of Jeff Koons, a particular example that, happily, this exhibition avoids. The most interesting parallels to be drawn to the Baroque period in this exhibition are the old artists that each work seems to take from. For while the Baroque is frequently remembered as the time of Bernini (Koons), it was also the time of Caravaggio, who’s paintings parallel the devices of Abdul Abdullah’s work (refer to http://sensibleperth.blogspot.com.au/2015/06/abdul-rahman-abdullah-and-abdul.html for more on this). The Neo-Baroque and Baroque are partially characterised by what they were originally denigrated for being: derivative. The Baroque was that which drew on Classicism, the Renaissance, and for a long time was believed to have debased it, and the neo-baroque is partially characterised by its own drawing from history (‘partially’ as the neo-baroque is certainly an instance of post-modernity’s fascination with similar issues – yet not all postmodern regimes bear connection to the baroque). This is seen paralleled in Nicholl’s highly allusive practice, as well as the various intertextualities formed through the exhibition in each artist’s works. One particularly interesting segment of Baroque tendencies in contemporary art addresses the art of Latin America, and its appropriative nature (Miranda Lash and Christopher Fulton). Suggesting, after Oswalde de Andrade’s 1929 ‘cannibalist manifesto’, that the Latin Neo-Baroque is a de-centred, postcolonial hybrid where metaphoric cannibalism (of history or oppressing cultures) is seen to absorb the oppressor. This show also often deals with the marginal and the oppressed, and seems to reciprocate Andrade’s call to cannibalise the aesthetics of the oppressor, in order to overcome them. Interestingly and appropriately, Andrade’s most iconic line, in reference to the Tupi, who practiced ritual cannibalisation, is also a cannibalisation of Shakespeare: ‘Tupi or not Tupi: that is the question.” The neo-baroque remains fluidly defined, and is perhaps only the shadow of a resemblance to its eponymous historical referent, which is also difficult to define. There remain interesting connections to be seen between the decorative and the opulently aesthetic work here, its subject matter, and the Baroque and Neo-Baroque in Europe and Latin America.

The show’s cannibalisation of Shakespeare does add some depth to the work, yet he is used, I think, more as a symbol than as a point of engagement. Nicholl’s Venus and Adonis Frieze is perhaps the most pertinent engagement with Shakespeare’s writings, subtly subverting them with the violence of the decorative and the sentimental. Abdullah’s previous work, Sons of the Sycorax, (part of the Victoria Park Art Award last year, which, this year, has disappointingly turned into the Victoria Park arts festival) would seem to be a clearer engagement with the potential to activate such texts in a contemporary context than the work displayed here, which, although powerful, lack indication of the relevance of Shakespeare – nor feel like it needs it. The strength of the exhibition is exemplified in the theatricality of Collins’ works, and the aesthetic and decorative appropriation contained within it. It is this sensibility, that has brought these artists together, that is also the most potent aspect of the show.

(Closes on the 14th November along with Christian Thompson’s excellent show (http://www.christianthompson.net ) at Turner Galleries http://www.turnergalleries.com.au ) 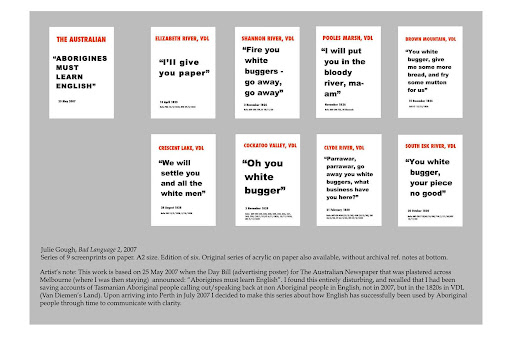